You might have seen in the news or published in the Lancet this week, a report from the EAT-Lancet Commission, revealing the ‘planetary health diet’.

This was no mean feat to produce. It involved 37 scientists of numerous specialities from 16 countries in a coordinated effort to develop proposals which meet planetary and human needs.

In this blog I’m going to take what I think are some key messages from this report and distil it down for you. Personally, I think it’s an honourable achievement and so valuable for raising awareness of the issues which face us, sustainable living and healthy diets.

To provide healthy diets in a sustainable manner to the ever-growing global population is an epic challenge.

Their overarching conclusion was:

“a diet rich in plant-based foods and with fewer animal source foods confers both improved health and environmental benefits.”

Currently over 800 million people have insufficient food and many more eating large quantities of food with poor nutritional value. These unhealthy diets cause more ill health and death than alcohol and drug use, smoking and unsafe sex combined.

On a planetary health perspective, our current food production systems threaten the sustainability of our climate and decimate ecosystems, threatening their resilience to thrive. 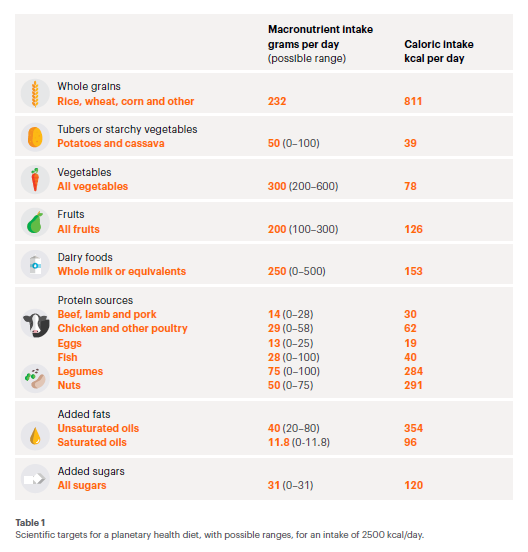 This is a flexitaran diet, as you can see, small amounts of animal produce are ‘allowed’ but not to the extent many of Western society consume today.

The authors acknowledge this is no small task and that transformation to this way of eating will require “substantial shifts” for many:

In reality, this means wealthier countries reducing excessive consumption of animal products. In less developed nations there are significant challenges of malnutrition from lack of calorific intake. The authors of the report acknowledge these recommendations needs to be taken into context of local realities.

These proposed changes are likely to have significant health benefits to those who adopt them (if not already following the principles presented in the report). It is estimated that 11 million deaths per year could be prevented.

Benefits to our planet will be just as significant. Currently food production is the largest culprit of environmental degradation and without fundamental changes being made UN sustainable development goals and the Paris Agreement will be failed to be met. Such radical changes necessitate global commitment in shifting towards healthier diets, as proposed in this report, and innovative restructuring of the global food production system.

With this guidance it is proposed that feeding the 10 billion people estimated to be living on our planet in 2050 in a sustainable manner will be achievable.

This commissioned report brings together two of my passions, lifestyle medicine and planetary health/stewardship. I fully support it. I acknowledge it will be a big adjustment for many, but for the sake of our planet, I endorse you to start making changes today.

To view the report summary in English (also source for images used in this article) click here.

View all posts by thelifestylepill

🌟LOCKDOWN PODCAST OF THE DAY 🌟 I love the theme of kindness running through this conversation between @drchatterjee & @davidrhamiltonphd 💚🙏. Especially their discussion about how contagious it is, it reminded me of how contagious smiles are 😊. Everything from oxytocin to tennis, I learned new things and escaped the COVID-19 dominated world for a couple of hours. Take a listen and spread some kindness, something we all need in these challenging times 🤗🙏💚. #kindness #lifestylemedicine #lockdownpodcast #lockdown2020 #covıd19 #stayhome #drchatterjee #randomactsofkindness
🌟LOCKDOWN PODCAST OF THE DAY 🌟 Today's podcast offers something I feel we all need right now, a few moments of peaceful quiet. The untangle podcast, hosted by @ariels_musings, is offering a new short meditation every week. This is the first in this series, which is now in its 3rd week. It's a 16 minute meditation to help you feel calm & grounded 🧘🏼‍♀️. Enjoy 🙏. Let me know how you get on in the comments below ⬇️. #lockdown2020 #covıd19 #mindfulness #meditation #breathe #peace #tranquility #calmamoungthechaos
🌟LOCKDOWN PODCAST OF THE DAY 🌟 So on yesterday's podcast of the week I asked you if you'd like a daily podcast recommendation during lockdown to help keep us all a bit more connected. 100% of you said yes! So here we are 😊. Some pods I share will relate to COVID-19 & others will provide some escapism from it all. Up today is the first episode of a brand spanking new podcast! Steths, Drugs & Rock 'n' Roll! A 'health podcast with a twist` - this one definitely got me smiling. Check out what happens when @drzoewilliams , @drsarakayat , @drranj and @drtijionesho (like mustard dijon mustard... Or is it 🤔). #doctorsletloose #afterhours #doctorsofinstagram #lockdown2020 #covıd19 #stethsdrugsandrockandroll #lockdownpodcast
🌟PODCAST OF THE WEEK 🌟 I don't know what it is but there's something about @madeleine_shaw_ 's voice which is just so calming! Just what I needed and felt like a big virtual hug when I tuned into this episode! @dr_jenna_macciochi has so much knowledge about immunity yet puts this exceptionally complex topic into understandale words for us all. I love how she focuses on how immunity requires balancing, not "boosting" & how this is a long term journey, not just quick fixes when you think you need it. I have listened to a few other podcasts this week which I really enjoyed. I am thinking with the lockdown we might all need something to connect us to others in this time. Therefore I'm doing a poll on my stories - would you like the treat of daily podcasts for a week!? Some for escapism to let our minds wonder out of the current pandemic and some on the topic of COVID-19.... Let me know in my stories 👍. #lifestylemedicine #immunity #balance #longevity #calmamoungstthestorm #sleep #nutrition #stressmanagement
🌟PODCAST OF THE WEEK 🌟 @brenebrown started a podcast...Do I need to say more!? This episode came at a perfect time for me, having taken the jump into vlogging with the vulnerability which comes with this, and our current pandemic, as @brenebrown says, I don't know about you but this is the first pandemic I've ever lived through! Listen to this 💚. #podcastoftheweek #vulnerability #brenebrown #firsttimes #shamespiral #covid_19 #lockdown2020 #courage #reflection
🌊NEW YOUTUBE VIDEO 🌊 Link in my bio to the video ↗️👍. 💦As it's #worldwaterday I'd thought I'd do a vlog on #bluemind. I give a review of the book Blue Mind by @wallacejnichols and talk about how we can use blue mind to support our mental wellbeing during the COVID-19 pandemic, with suggestions for how to practice it whilst social distancing or self isolating. You can use the habits you build to practice blue mind once the pandemic is over. 💦I end by discussing how this demonstrates how the health of our planet & our health are so interconnected. There is evidence that those of us who connect with nature are more likely to protect it. I give suggestions for how you can support our oceans, now and after the pandemic has passed. #lifestylemedicine #planetaryhealth #mentalhealth #mentalwellbeing #emotionalwellbeing #togetherevenwhenapart #natureforwellbeing #natureformentalhealth #shinrinyoku #socialdistancing #selfisolating #selfcare